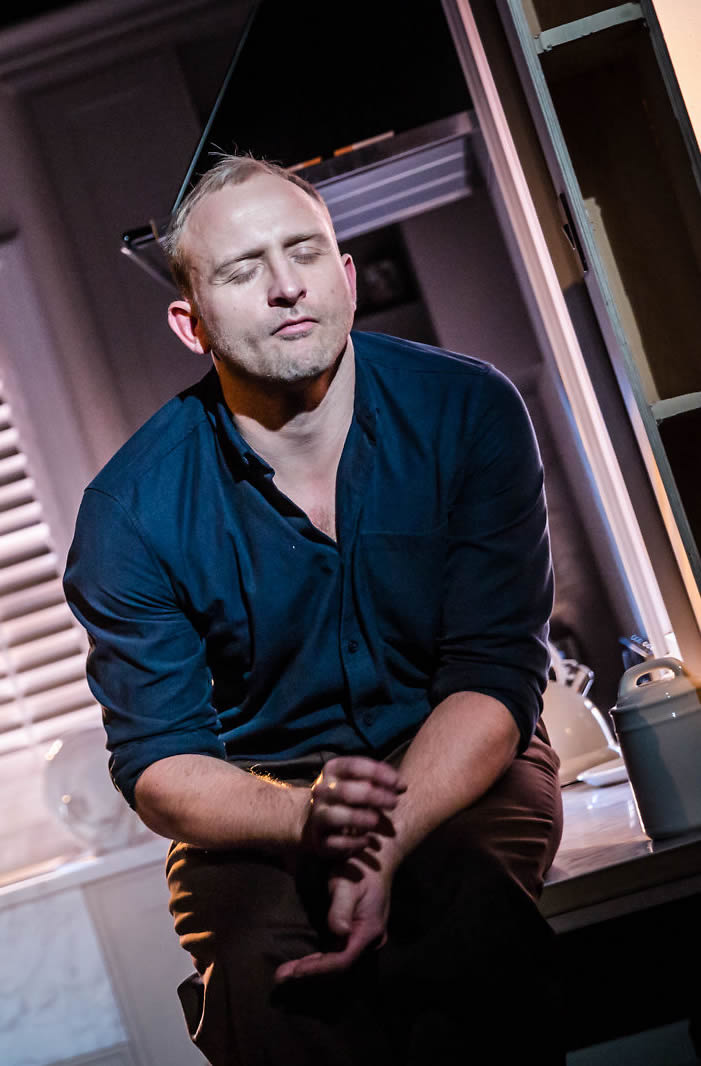 Sunline is a comedy by Ivan Vyrypaev, which shows how to achieve a positive result. This time, the well-known playwright and director deals with the most current subject of our time – building communication between people. How to get into a real, deep contact with another human being? How to listen and be heard? How to get out of formal relationships and start truly communicating with others? How to grow up and go your own way, overcoming the clichés of family life?
Ivan Vyrypaev wrote this refined comedy with his own sense of humor and lightness. He performs there a therapeutic session on topic: how to be happy with your wife, husband, partner and the world in general. The plot of the play is the conflict of a married couple who tries to untie complicated psychological knots, stagnant blockades and unforgiven resentments, so well known to each one of us. A text is written with amazing virtuosity. Brilliant humor, well-structured dialogues, and thrilling rhythm.

“As usual, the text of Wyrypajew is written like an opera. Any false note would be easily noticeable, so the play needs performers with absolute hearing. Such as Karolina Gruszka and Borys Szyc. She speaks in a “barrel organ like” rhythm characteristic for Wyrypajew, which is supposed to soften the sound, moving everything almost to a comedy tone, but it is only a cover. He breaks this rhythm consciously and deliberately, as if wanting to be the dominant factor in mutual relation. And all this is lined with love. ”

“Don’t hesitate to see Sunline by Ivan Vyrypaev with the great Karolina Gruszka and Borys Szyc at the Theater Polonia. An intelligent, poetic yet brutal, mocking ballad about all of us. Proof that comedy does not have to lead to a vulgar laugh, and that it can strike with a force of an express train and crush the viewer. Who are you laughing at? You laugh at yourself. For sure, dialogues from the Sunline will become iconic and enter the everyday language. A real battle of the ego. Pulp fiction of every relationship. ”

“Ivan Vyrypaev wrote one of the best play of all plays ever written. It is universal, like the classic dramas of Tennessee Williams, Edward Albee or Arthur Miller, and will be played for years in Polish and probably European theater. A couple with seven years of experience can be a couple over the edge, for whom time really stars to count. The perfect order for two great actors. The premiere cast perfectly fulfilled the director’s idea. Gruszka and Szyc play with a hole in the soul, filling this hole with a conglomerate of emotions, once uncorked, sometimes silenced. Staccato and legato. Ripping and stitching the relationship, fantasies, hopes. However, the most beautiful thing is that the characters of the new play of Wyrypajew do not ceasefire, they really fight for a better day. They are egoists, they have a lot of flaws, but they can still ask questions, the most difficult ones – for the future of their relationship, the future of their world. They miss the expressive “sunline”, even when – like Werner – they mock and scoff at it. Irony is a smokescreen for fear of feeling. ”