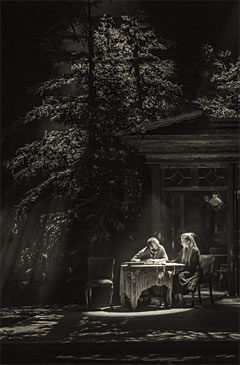 “I wanted to create a beautiful, modern costume play in which the viewers meet the original work of the author. That is something very rare in contemporary theater. I wanted a colorful and expressive performance in which viewers will be able to admire and associate with the classic text, a real work of art. In that way we created an up-to-date story about truth, love and spirituality in the modern world. A story about being lost, about misunderstandings and about feeling unfulfilled. Chekhov still poses questions about disappointment in love, broken ideals, lack of faithfulness and about the end of all our dreams that change and disappear over time. I have the impression that following the tradition is the biggest avant-garde today.”

“Uncle Vanya” without cut offs. Word after word. Ivan Vyrypaev allows the author to speak for himself on his own behalf. From the beginning to the end, treating the text as an inviolable score, he tells the story that took place in the rural estate of the Voynitsky family, between the arrival and departure of the professor Serebryakov and his beautiful wife Yelena. Between the lines hides a sophisticated story about an era that has passed, about people who are gone… But there is a theater language that has not expended itself, has not aged. Chekhov gives us a deep and passionate image showing the surface of life. Uncle Vanya is a play that does not need to be modernized to be modern, and additionally in an all-star cast.